How I completed a 20-month MBA without a significant change in my net worth. 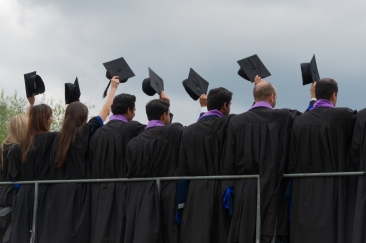 Back in 2012, I made a decision that accelerated my career and income potential. I did an MBA. Three letters that mean: smart, employable, qualified.

The source of this big leap back into academia originated during my job as a project coordinator. I would sit in meetings with project managers and it was very obvious that they all made way more than me. After some LinkedIn stalking, I found that they all had business degrees.

Heading into my MBA, I had imagined that any business program that would essentially bankrupt me, but with a dedicated effort to manage my money, I found it to be quite affordable. In fact, I would graduate 20 months later with a minimal dent in my net worth. How was this possible?

Then I saw a school that caught my eye: $30,000 tuition, decent reputation, two paid internship terms, and a location in a small town where cost of living was low. I quickly ran some numbers and projected that it was something I could afford with the current savings I had in the bank. I wrote the GMAT and applied shortly after.

Less than a month later, I received my admission letter with a nice little bonus: a $3,000 entrance scholarship, thanks to my high GPA from my Bachelor’s degree and GMAT score. It just goes to prove that one should never slack in any academic environment – you never know what future value might be extracted!

Work your ass off and play to your strengths.

After my first class I came to realize I was surrounded by people who were much smarter than me. Some of my classmates had years of work and leadership experience, Bachelor’s degrees in business already, accounting designations, and fully fledged careers. All I had was my theatre degree – what use was that?

While all my classmates might have been academically smarter than me, I slowly realized that I had years of teamwork and presentation experience behind me. By showcasing this skill consistently, it meant I became a good asset to have on high performing teams when it came to designing talks and coordinating projects. For whatever I would teach them on presentation tactics, they’d teach me back on accounting principles and finance calculations. Talk about synergy!

The MBA also came with lots and lots of studying. 8 courses in 4 months was our first term, so rather than taking my foot off the gas like some of my classmates with business experience, I went pedal to the medal, eventually finishing with higher grades than many of them. When in doubt, recall that hard work can trump lazy talent any day.

Even better, my hard work did not go unnoticed by my professors. By the end of my MBA, I netted $13,000 in scholarships alone, good for close to 50% of my tuition!

Get out of the classroom

But scholarships aren’t just granted for academic achievement. They take into account other factors, usually community involvement. So that’s exactly what I did: I joined a local non-profit as a board member, which involved a minimal time commitment but also gave me a nice story to tell in my scholarship essays.

I also played even more to my strengths as a presenter, joining case competitions later in the program which netted me even more money due to sometimes lucrative prizes. Upon graduating, I won $5,300 in prize money, bringing my free money total to $18,300! This combined with my two internship salaries (totalling $27,000) basically covered all of the expenses for the program. My commitment during the internships even resulted in two job offers after graduation – if I can give any advice when it comes to interning, never slack and perceive yourself as “better” than the work assigned.

Got told to get coffee? Do it with a smile.

Got told to photocopy a bunch of stuff? Do it with a smile.

This one is obvious: as a student, luxuries are out the window. Across the 20-months, I lived in 5 different places with different roommates each time. I slept in regular apartments, basement apartments, and dens. I even lived at home and commuted 4 hours a day for one of the internships – anything to save a dime.

Still, I was surprised at what some other students paid for the luxury student condos near campus. One summer, while I lived in a basement apartment with all utilities included for $350 a month, some of my classmates paid over $800 for a room in a student condo. They still had roommates just like I did but with a minor difference: they each had an en suite bathroom and a common games room. I’m sure that must have been nice (because sharing a toilet must be so gross, right?), but was it really worth an extra $450 per month?

My MBA years are also where I got really into board games. Instead of going out drinking and clubbing, my friends and I would head to the beer store and drink and play Settlers of Catan

on Friday nights. It basically became our ritual.

Don’t buy new textbooks if you can get away with it.

I almost wet myself on my first trip to the campus bookstore because the bill was $1,700 if you bought everything then and there.

Instead, I secretly searched every library in town. I saved hundreds of dollars by taking out books on term loan (yay grad student benefit!) and returning them after my studies were complete.

I also shopped online through Amazon and Kijiji to find cheaper or used copies and then proceeded to even sometimes sell them to other students at higher prices. Call it sleazy if you want, but if you price a $100 textbook in good condition for $10, I’m going to use it and flip it for $50 four months later.

It is important to note that two major costs are not included here: first off being my cell phone bill, the second being my car insurance. My rationale is that both of those costs would be occurring whether I did an MBA or not. As I was living at home before my MBA, the cost of living in a new town, the books, and living essentials (food, entertainment, etc.) are all costs that were introduced  to me once I started school again.

What’s an MBA done for me?

An MBA has done wonders for me, accelerating my career and allowing me to enter new, higher paying fields. The career benefits I’ve experienced have been especially unique for me as someone who came from the performing arts.

My salary growth has also been exponential: back in 2011, I made $20,000. In 2012, when I moved back home, I worked part time as a project coordinator with a take home of $32,000. My first job out of my MBA in 2015 was almost double that amount and since then my salary progression has allowed me to become one of the higher income earners when compared to the average Toronto household income.

Going back to school isn’t as hard as you think.

When I went back to school, I thought it was going to be a rough ride for me financially and mentally. However, these days many universities offer tons of free resources if you’re a student when it comes to mental and physical health and financial aid.

Furthermore, if you are a Canadian who has been historically been contributing to your RRSP, you can partake in the Lifelong Learning Plan (LLP) where you can withdraw up to $10,000 per year tax free as long as you are enrolled in full-time program. The rule is that you must pay back any withdrawal amounts over a period of 10 years. While I wasn’t in a position to use the LLP as I had no RRSP, I still did draw down my TFSA to cover some initial upfront costs before my scholarships and internship salaries started to pick up.

Either way: with hard work, commitment, and frugal living, an MBA can be affordable. Just be smart about it and don’t pick a school in a city you can’t afford!

6 thoughts on “Get your MBA for Free.”