A sort of review of “The Company Men”

From that poster, I’m sure you can determine what the flaws were: yes, the plight of privileged white guys in suits can be hard to sympathize with, the script had plenty of gag-worthy overly sentimental moments, and the character arches were all predictable.

But for all its flaws, it had valuable lessons that resonated with me. In particular:

Movie Lesson #1: We mistakenly value ourselves by the jobs we have.

We are guilty as charged of this. Growing up, my father always told me that whenever I moved jobs, I should aim to always move up in salary. “Always forward, never backwards,” he’d say.

While that piece of advice is certainly valuable for career growth and development, the mentality becomes intertwined with other parts of our lives: the type of car we drive, where we live, the clothes we wear, etc. Before we know it, we begin to think that everything else deserved to be upscaled as we get older. In other words: we incorrectly mingle career growth and possession growth together.

Movie Lesson #2: We become a slave to our things and our routines.

And as our possessions grow, we become reliant on them. In The Company Men, all the main characters had beautiful homes, luxury cars (except for one), fine furniture, and became accustomed to family seasonal trips.

As much as these items and experiences added value to the lives of the characters and their families when times were good, it incorrectly became a baseline of existence and success. All of a sudden, not owning a Porsche or not owning a golf club membership felt like failure.

No one likes losing access to things, but possessions and fancy experiences don’t have to define who we are if we don’t let them.

Movie Lesson #3: We are afraid to reset our standards of living. 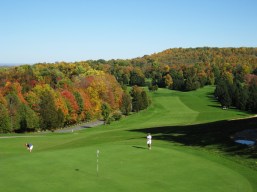 An eye-opening scene of the movie was when the fantastic actress Rosemarie DeWitt tells her movie husband Ben Affleck that they need to cut back and makes a few recommendations, such as: “List the house”, “Stop golfing”, “Eat out less”, and “Sell the Porsche”.

Ben vehemently disagrees and dismissively says: “We will do no such thing.” Why? Because he has become so used to all the amenities around him, he can’t imagine anything less.

We encounter this fear every day. I’m guilty as charged when it comes to my car. Living in downtown Toronto, I could probably save an additional $3000 a year if I sold my vehicle and used a car share service or relied more heavily on public transit. But I won’t and even if I lost my job suddenly, I probably try and hold off selling the clown car for as long as possible.

Lowering a standard of living may seem difficult or impossible, but is it really? Haven’t we all done it before? Think about your student days: one minute you were probably living at home in your parents’ spacious home, fridge consistently well stocked with food. The next, you moved into a cramped basement apartment eating leftover pizza straight out of the box on the floor (k – maybe not, but that’s my true story).

In either case, we probably downsized our lives drastically when we first left the nest. We can always downsize again if we have to. And there’s nothing wrong with that.

Movie Lesson #4: We worry about perception.

But when we downsize, we not only worry about how drastically we might have to change our lifestyle, but what others will think of us. This is very apparent in the film when Ben Affleck tells his movie wife desperately that “I need to look successful!”, despite no longer having a job or income, and Chris Cooper’s movie wife telling him he still needs to come home after 6:00pm so the neighbours don’t know he’s out of a job.

This need to “look successful” didn’t exist when we left the comfort of our parents’ home because every other student/young professional was basically in the same boat as us: poor and just happy to be on their own.

But as we got older, suddenly, the notion of “keeping up with the Joneses” became a driving factor in how we ran our life.

But does it have to be?

Conclusion: We can define “wealth” by our own terms.

Every one of us is already individually wealthy. Perhaps not in the traditional view of what’s in our bank accounts, but what we have in our lives. All of us have people that care about us and amenities that many others do not have access to.

Think about that for a second.

Thousands of years ago, a hot bath was restricted to royalty. A group of dedicated servants (or slaves) would work for hours to first heat the cold marble tub with hot water heated over a fire. They’d drain the tub and then refill the tub a second time with water at a temperature that had to be perfect for their king/queen/whatever.

Now? You can turn on your tap and voilà, you’ve got a hot bath. Too hot? Just turn the nozzle to the right. That’s just one example of wealth.

We really don’t need to think about those “Joneses” when we think about our wealth. That’s a fruitless exercise. We need to simply think about all the things in our life that makes us truly happy and focus on nurturing those things.

As a parting thought: I wish the movie had ended on a note where the characters successes and failures were less tied to job optimism, but more on the power of being surrounded by loved ones. Think the ending of It’s a Wonderful Life.

That’s true wealth to me.

It’s not like George Bailey at the end is saying: “Hey – thanks for all this cash, but my house still doesn’t look quite as nice a Henry’s? Think you can give more?”